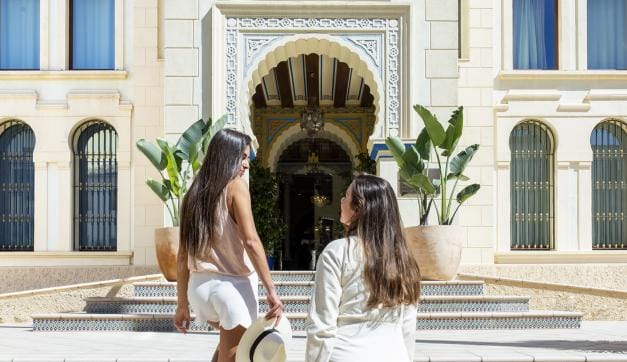 The Hotel Kazar is in the heart of Ontinyent. Originally called the Chalé Mompó, it was built in 1925 in the neomudéjar style with touches of late Valencia modernisme.

The building and its facilities were rehabilitated in 1997 and it was then converted into a hotel. using ideas taken from palaces in North Africa and the Middle East as an inspiration. It now has a total of 20 rooms, with a ground floor, two upper floors and an attic in the central section.

The building is crowned by two small minarets and two towers on both sides that give the hotel a unique look. It is surrounded by a small private garden with two fountains and palm trees. The complex also has another more modern building nearby with 19 additional rooms.

The city of Ontinyent and its surroundings have a lot to offer the tourist. Natural spaces, religious art, monuments, museums and even a cooperative that makes its own wine and olive oil.

The Font de la Figuera, Fontanars dels Alforins and Moixent are home to some very special wine cellars just waiting to be sampled on a weekend wine route in the regions of La Vall d’Albaida and La Costera.